As I don’t have any new finished work to show this week, I’ll start bringing in my older, “pre-blog” minis. I thought it would be appropriate to start with the first group of minis I painted when I got back into the hobby in the summer of 2017.

Actually, let’s start with how I got back to the hobby, the sweet plastic crack! Like many, I first got into Warhammer (40k) when I was about 11-12, did it for a couple of years and lost interest. In the recent years, I had been occasionally checking out the local game shop and admired the GW miniatures on display, but the price of the minis was just too much, as I just wanted to try my hand at painting a few models again. Then in the summer of 2017 I was at a flea market, looking for old toy cars, when I spotted a cardboard box with some Warhammer art on (someone had also written “tin soldiers” on the side:). I thought it would contain someones badly painted first army, but to my surprise there were four boxes of brand new, still shrink-wrapped minis from various factions. The old guy selling asked me if 20€ would be a fair price, and I had no choice but to agree and purchase the lot!

Having gotten the models basically for free, I thought that it would be cheap to get back to painting. Then I went to the local game shop and bought about 100€ worth of GW paint pots! So much for pocket change hobbying.. But, after watching a whole lot of WHTV’s Duncan’s painting guides from Youtube, I painted my first models in roughly 15 years.

These Chaos Cultists were very much practice models, as I had/have no intention of starting a collection around them. I did learn a lot of new stuff with these guys, such as using primers is important especially without a painting handle (these guys are “primed” with Abaddon Black), thinning paints is good and that washes are talent in a bottle. Also I varnished these with an AP can, messed it up (most likely my fault) and haven’t dared to varnish any of my good models ever since..

Painting-wise, I was very happy with the red and most other colors, but the black looked very unfinished with just Abaddon base and Eshin Grey highlights. For the last two guys (on the left in the picture), I tried Eshin base and two coats of Nuln Oil, followed by Eshin highlights. This seemed to work better, and I’ve used that recipe ever since.

Right, that’s probably enough rambling, and not enough pictures. I only have that one picture of these guys though, and as they’re not anything special I did not bother taking new shots. The next post will most likely be more old stuff, but hopefully I’ll also get something new finished before too long.

The work continues on my Age of Sigmar starter set, and with it Azazel‘s February hobby challenge. Here’s the second set of Liberators, this time with swords instead of hammers!

As the box came with two sets of four identical Liberator models (the two leaders being different sculpts), I wanted to customize the other set if at all possible. I happen to have a box of five multipart Liberators, and as it comes with both swords and hammers, decided to go for a simple weapon swap. Drilling holes for pins was a bit harrowing, as it left the weapon handles with 0.1mm walls, but amazingly I didn’t screw it up on any of them. Finally, as I had access to a two-handed sword, I swapped one of the monopose models for a multipart one, and gave him the big sword. For some reason the arms were a nightmare to pose and required a lot of greenstuff..

The paint scheme is of course the same as with the previous group, so not much to add about that. The only thing that differs slightly is unsurprisingly the swords, which didn’t get a purple wash like the hammers did. I was originally a bit concerned that the large swords would be too similar in color to the armor, but the golden guards and leaving the wash off created suitable contrast. I played with the idea of some blue wash, but decided to leave it off as these are just standard swords.

To finish this post I give you a group shot of the 10 Liberators and the current state of my AoS starter set. For my next project I’ll be going back to 40k and I don’t know when I’ll continue on these guys. It feels good though to have completed all of the basic troops and a large monster, so I think I’m over the half-way-point at least! If just counting the models, then without a doubt, but the two yet-unbuilt heroes might take a while.. 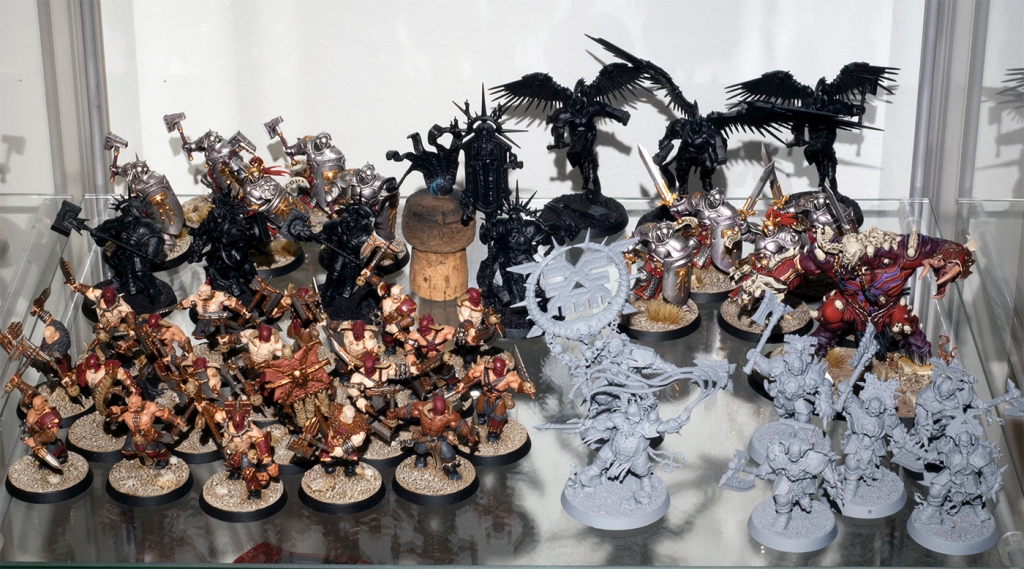 Azazel‘s February hobby challenge is dedicated to neglected models, which I’m sure we all have plenty of. I decided to dive back to my Age of Sigmar starter set (the first one) and get at least the ten Liberators done. That would mean that I have all the line infantry and the Khorgorath done, leaving “only” the elites and the characters. Here’s the first half of the Liberators done.

I wanted to use the same color scheme that I used for my SCE Shadespire warband. It’s called “Silverlions” and was created originally by Thilo Engels, aka Banzai1000. I really like the look and and it’s pretty fast to paint too. I wanted to paint to these up quickly, but still I ended up doing pretty much every step that I took with Steelheart’s Champions, except that I didn’t highlight black and was a bit more lenient towards mistakes.

Comparing the Liberator Prime to Severin Steelheart, the results are pretty close to each other. I maybe could have done another appliaction of thinned Druchii Violet, but there’s a hint of color and I think it’s enough. And to think it took me a month to paint the Champions (three models) and these five guys were painted in a week..

The red on the cloak/skirt/whatever was the only thing that I couldn’t color match, and it ended up brighter than on Steelheart. I tried layering with Wazdakka Red, but as that didn’t look right I changed it to Mephiston Red. I think I like this more though, so I don’t mind.

The five remaining Liberators are on the pipeline next. The steel armor and the black bits are already done, as I did those at the same time for all ten, so they’re pretty much half-way there.