I’m hard at work painting the Thorns of the Briar Queen, but as they’re not done yet, I’ll have to showcase something else. Delving in the Underworlds, I feel Shadespire terrain is most appropriate!

If you’re familiar with Shadespire, you might know that official terrain, or “3D blocked hexes”, was never released. Many people seemed to scratchbuild them, however, and I’ve also found a couple of 3rd party terrain sets. The terrain pieces in this post are “Shadowpike Ruins Terrain Set” from Bitspudlo, and they can be used to fill every blocked hex in the two original Shadespire boards.

These were actually my first resin models. I had heard the horror stories about Forge World / Citadel Finecast and was a bit wary of buying them, but as the models looked great in the pictures and the price was right, I decided to take the plunge. I’m happy that I did, as the quality pretty much perfect! I shaved the base edges a bit, but that was it. I’m definitely more open to getting more resin models in the future. Probably not from Forge World though..

I painted the ruins with my goto sandstone recipe, the same I’ve used for basing pretty much all my models. In addition to the stone, there were plenty of details scattered about: chests, pots, lanterns, candles and of course some bones. Painting all of them took a bit of time, but it was fun to try out copper paints and verdigris.

When photographing the finished set I couldn’t resist taking some “cinematic” shots. Perhaps not the nicest of executions, technically speaking, but I liked the ideas. Can’t remember why I didn’t take photos with the Sepulchral Guard, as I had definitely finished them at the time.

So yeah, I’m very happy with these pieces, and they’ve been great on the game boards as well. I’ll probably end up getting the official terrain set for Nightvault at some point, even though I’m not crazy about all of the models, and the quality certainly isn’t as high as with these.

One part of Azazel’s April challenge focuses on armies, and showcasing them “like 16 year-old girls post selfies”. My current collection doesn’t really have any proper armies, but I do have a collection of Shadespire warbands and terrain. They’ll do!

Just the one group photo this time. I have previously shown two of the warbands on this blog, my first proper post was to showcase the Skaven, and just last post was about the Stormcast Eternals. In the future I will be posting showcases for the remaining warbands – the Deathrattle, Khorne and Orruk teams – as well as the scenery pieces.

As you can see from the photo above, I’ve tried to come up or find a different color scheme for each of the groups, and if possible, go with something other than the box art. With that, I am just a couple colors short of a color wheel! If I can come up with a yellow and a green scheme, I’ll be set. Green should be easy, but yellow might be more tricky. Maybe I’ll count gold, and paint one of the Stormcast bands in the default Hammers of Sigmar scheme..

I’d like to eventually get all of the Shadespire warbands, and Nightvault as well, but I’ll have to see if I can keep up with GW’s release schedule. I’ve obviously fallen behind pretty badly (9 Underworlds teams to go, and soon two more), but as long as I can get the Nightvault box before it’s discontinued to make room for season 3, I should be good.

Azazel‘s monthly painting challenges are partly the reason I started this blog, and now it’s time to present my entry to January’s challenge – Terrain & Centrepiece models.

This is more of a token entry, something small that I painted up in a couple of days. As most of the month was spent on Spiteclaw’s Swarm, I had to employ some (warp) speed painting, but I managed to pull it off, and the result is not half bad, if I say so myself.

I painted a set of objective markers from the old Battle for Macragge box set and a few pieces from the even older 40k Battlefield Accessories set. I can’t remember which of these sets I’ve had longer, but they’re both from around 2004. I was seriously amazed when I found out that the Accessories are still sold, but I do think that the barrels are nicer than in the new container set. The tank traps are pretty bad though..

The painting was mostly just washing, drybrushing and sponging, which was a pretty nice change of pace. The pallet got some extra love with freehand hazard stripes, and while they’re not super neat and even, I think it adds some much needed interest to an otherwise very plain piece. The fusion core from BfM was also painted a bit more carefully, and I thought it would be a good place to practice OSL. Not really visible in the pictures, but I’m not super satisfied with the result. 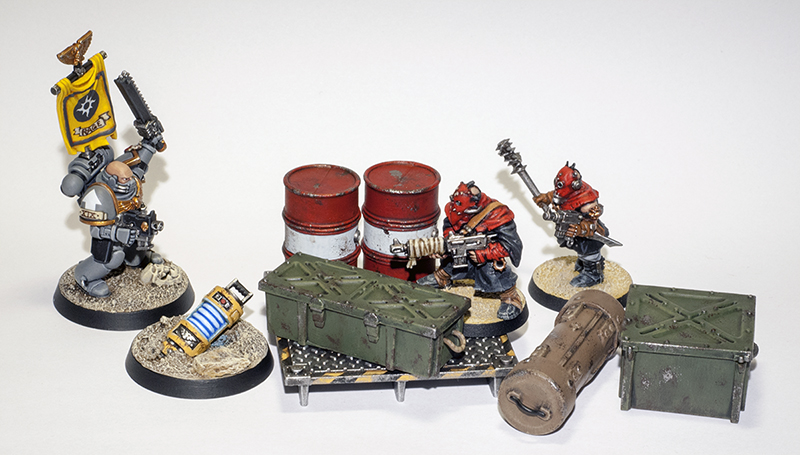 Phew! Challenge completed with almost half an hour to spare!